Benjamin Fig (also known as a Weeping Fig) is highly sensitive to any kind of changes. That is why it has won the reputation of being fussy and demanding. Even the smallest stress results in leaf loss. What can we do to prevent it?

Benjamin Fig – description of the plant

In natural environment the plant grows from the south Asia down to north Australia and the Salomon Islands. It grows as a tree there, sometimes up to 30 metres. In northern hemisphere it is grown as a potted plant and grows up to a few metres. 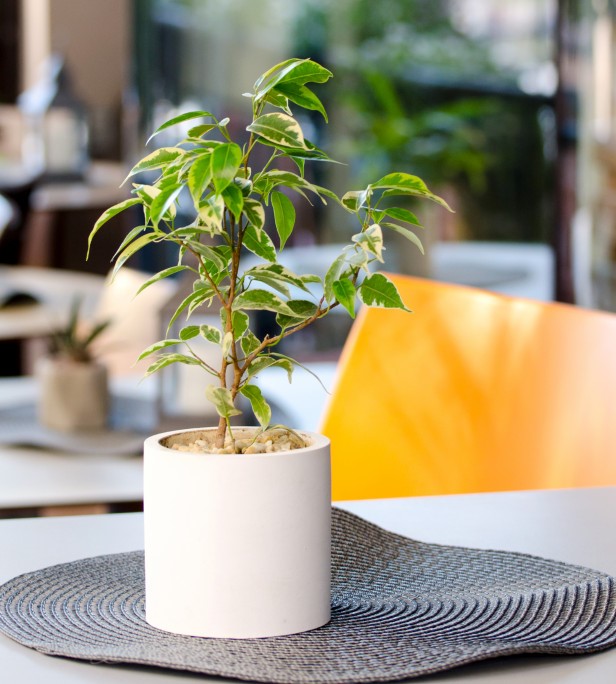 The leaves are small, up to 8 cm long and 2,5 cm wide. Elliptic in shape with sharp tips pointed downwards. Usually green, though there are species with a bright-green leaves and a white edging.

The plant can be trimmed and shaped like bonsai. Trimming has to be done in the spring. Once you cut the twigs, white juice flows out. 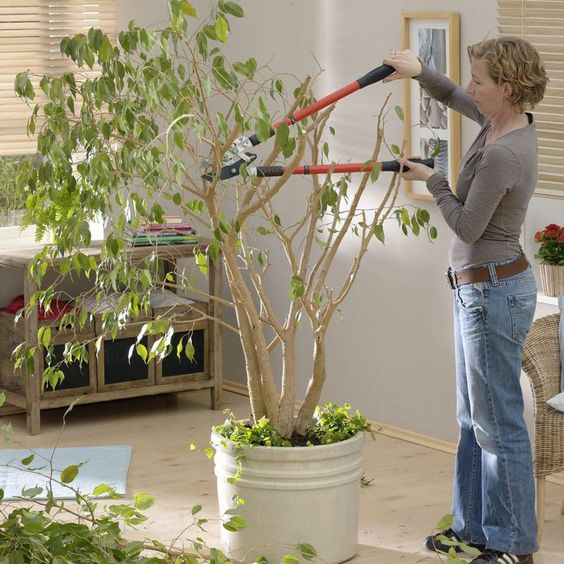 The plant loves stabilisation. Once it has been somewhere for some time, it gets used to the angle of sun rays. It is very sensitive to any changes in the environment and care, which simply speaking stress it. And this is the stress that makes the plant lose leaves.

Benjamin fig – what to do to prevent leaf loss?

If your Benjamin Fig loses leaves, it might result from inappropriate care. Learn how to take care properly of this popular plant so that your fussy Benjamin Fig will not lose its leaves anymore. 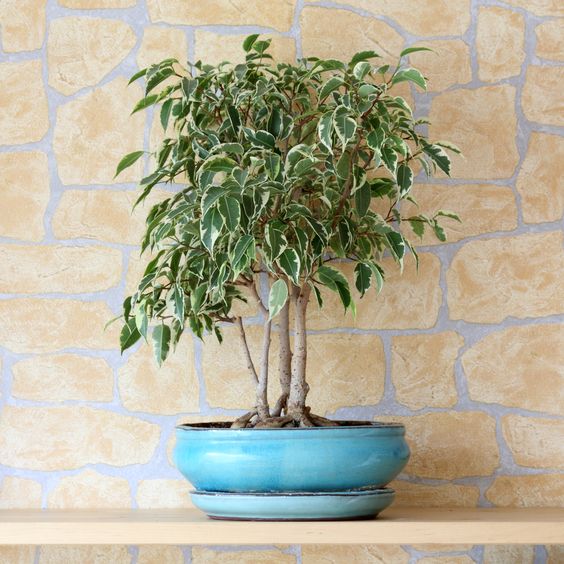 Benjamin Fig – what kind of soil?

The plant prefers permissible soil, containing a lot of humus, and fertile.
It will grow well in a universal soil for potted plants.
The pot shouldn’t be too large. The plant grows well in rather small pots, even a bit too small. Inappropriate pot might inhibit the plant ‘s growth. 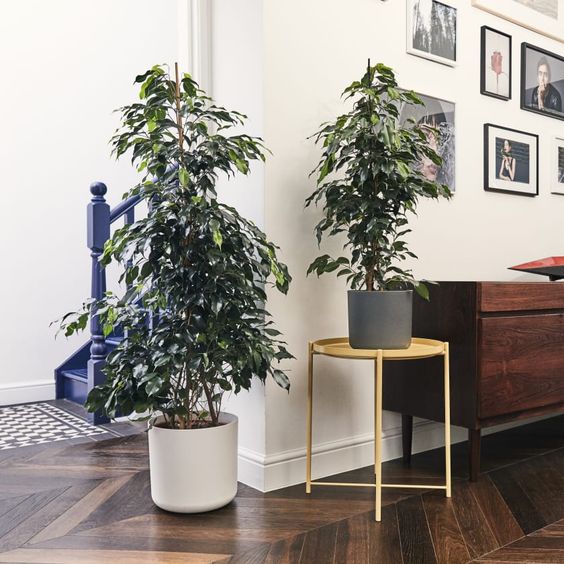 How often should it be watered?

The plant needs to be watered only when the soil is a bit too dry. Usually watering it once a week is enough, sometimes it can be even less frequent. There should be no water on the plant pot base. The plant is sensitive both to excessive drought and excessive watering, which usually leads to leaf loss.

Excessive sun exposure is definitely not recommended. Direct exposure to sun is in fact very harmful. However, if the plant is too far from the sun, it will begin to lose leaves.

Again, high temperatures will result in leaf loss. Although Benjamin Fig prefers warm environment, there are temperature ranges where it grows best. In the winter it must not be less than 15 degrees Celsius, and in the summer it has to be below 28 degrees C.

Any sudden temperature changes, be that opening the window in the winter or turning up the central heating too much, are more than likely to lead to leaf loss. That is why draughts are not welcome.

Moving from one place to another is really stressful for the plant. The best location is near the window overlooking the east. Southern windows are exposed to the sun too much. Remember that even a tiny rotation of the pot or moving it might result in leaf loss. 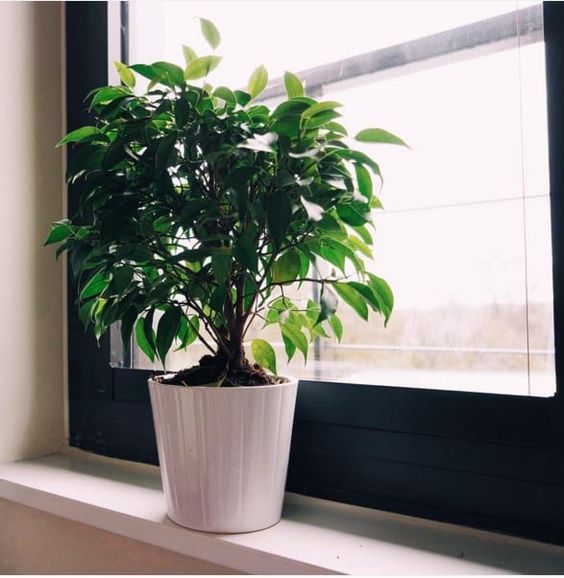 Benjamin Fig – how to take care of the plant?

Apart from the basic things you have to do mentioned above, there are a few more you can’t miss.

Use some boiled water to sprinkle the leaves. You can also give your Benjamin Fig a shower with lukewarm water every two weeks. That’s the best way to dust the leaves.

To fertilise the plant, use universal fertilisers every two or every three weeks.

As for transplantations, young plants every year, older every two – three years. Remember that Benjamin Fig does not like big pots.

Every year examine condition of the roots.

In the summer put the plant out, be that garden, balcony or terrace. Remember that the plant does not tolerate direct sun exposure.

Benjamin fig kept outside grows much faster and will quickly regenerate after losing leaves. 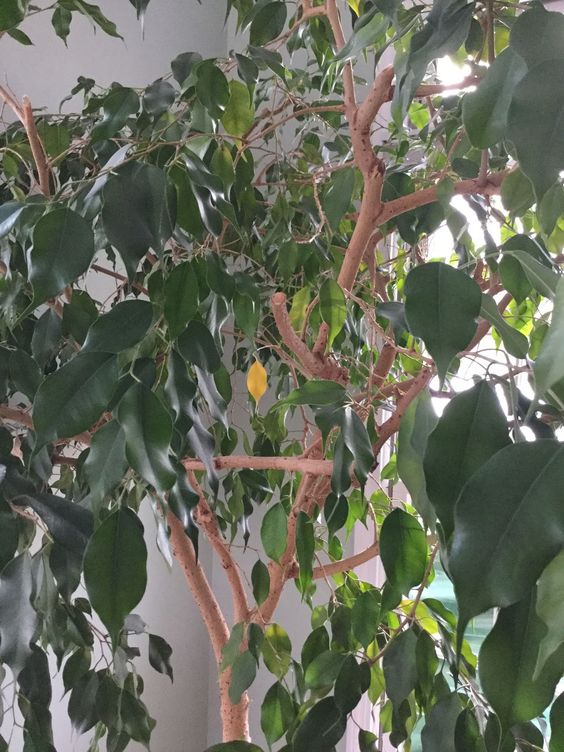 Soft scales are small brownish bowls on twigs and leaves.

To fight them use dedicated products available in all gardening centres.

Rotting and molds are usually the result of excessive watering. All you need to do is reduce the frequency and/or amount of water and replace the top layer of soil in the pot.