The first episode of ‘Friends’ was broadcast on 22 September 1994. It immediately won a large audience, which over the years (the series has got 10 seasons) grew even bigger. Now almost everyone knows the bunch of young people living in New York. Today we have got a few things about the series you might not know yet. 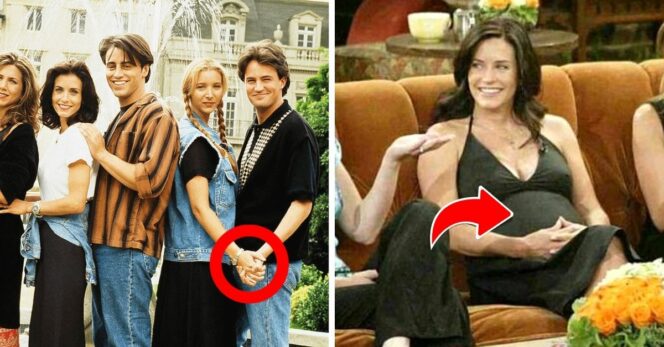 The laughter you can hear while watching is real as it was shot with real audience around. Interestingly, during the breaks the audience was also entertained by comedians. Normally it took 5 hours to shoot one episode. There were about 300 people in the audience.

Monica loves cleaning. In her real life, Courtney Cox also cannot imagine anything but impeccable order around her. That is why her dressing room always perfectly tidy. After some time she started cleaning up her colleagues’ rooms, too, as the mess in there was unbearable for her.

Matt LeBlanc (Joey) arrived at the audition with 11 dollars in his pocket. He spent his first salary on a decent lunch. Courtney Cox bought a car.

The series is set in New York. However, not even a single shot including the main characters was made in this city. The sitcom was shot in Burbank (California) and London.

Originally the series was going to be called Insomnia Cafe, and the whole plot was to be set in a typical American diner – a cheap bar serving breakfasts and lunches. As we know, the plot got finally set in the Central Perk Cafe. There are several places all over the world that were inspired by this venue.

Episode 11 in Season 2 is called ‘The One With The Lesbian Wedding’. This is when Carol (Ross’ ex-wife) and her partner Susan get married. The producers were afraid that the lesbian marriage might not be approved by the audience. That is why 200 people were employed to answers possible phones with complaints. Eventually, only 11 people called.

The most frequently quoted line from the series, often used in memes and on T-shirts, is ‘We were on a break’. It comes from the moment when Rachel and Ross decided to break up for some time.

The Phoebe plot, where she decided to become a surrogate mother and gives birth to triplets for her brother and his partner, was not part of the original script. Lisa Kudrow was really pregnant and the scriptwriters decided that her crazy and chaotic personality doesn’t match the role of a responsible mother.

In the last season it was Courtney Cox (Monica) who got pregnant. The character she plays could not get pregnant – that is why her belly was carefully hidden.

The intro of ‘The One After Vegas (Season 6, Episode 1) is an unforgettable one. This is when the surname’s of all cast were extended with one more name – Arquette. That was to celebrate the wedding of Courtney Cox with David Arquette.

Which fact surprised you the most?