What tactic is best to use? Bet all the time on the “scissors” or alternate it with “paper” and “rock”?

Like most of things, this game is not just a coincidence – it’s a battle with formulas, psychology and adaptations. Here’s what the experts have to say about these types of games!

According to world statistics on the subject of the game “Rock, paper, scissors” at the beginning people most often chose rock. This decision is made mainly by men who are playing for the first time. In their heads rock is perceived as strength and determination, which is why you must tend to choose it.

Assuming that you play with someone who might think in the same way and competed more than once in this game, it’s best to choose scissors, because your opponent will think that you will pull out a clenched fist which means a rock so he or she will show the paper. 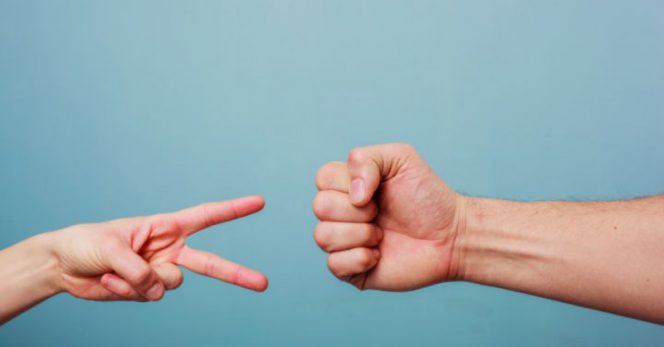 As an incentive and bigger commitment researchers paid students in case they won.

In all the games, three variants appeared at a frequency of about 1/3 as expected. Researchers have noticed a clear pattern of tactical people. They discovered that the people who were awarded kept their previous assumptions. On the other hand losers tend to choose the “safe” rock.

If you want to win it depends a lot on whether your opponent has a knowledge that is presented here. Assuming he or she doesn’t and yet beats you, you should play again with the same hand again (and choose what you choosed before).

If you don’t have any idea how to play this game, it’s worth remembering that the safest solution is paper – statistically it is shown with a frequency of 29.6%, less than 33.33% which would indicate probability.