Nuclear disasters are a massive tragedy, not only for people, but also for the world of plants and animals.

Sunflowers at war with nuclear fallout

The world held its breath twice. In 1986 because of the Chernobyl Power plant explosion and in 2011 after a series of earthquakes that led to the explosions at the Fukushima nuclear power plant. Both countries had to answer a very difficult question right after the vents: what could be done about the radioactive fallout? And the answer is… sunflowers!

• grow almost anywhere,
• absorb radioactive isotopes from the soil and accumulate them in their leaves and stalks,
• the accumulated radioactive material can be easily utilized,
• they absorb cesium and strontium from the contaminated soil as these elements provide the plant with the same nutrients as calcium and potassium (normally plants absorb potassium and calcium but strontium and cesium somehow imitate them)

After the Chernobyl disaster sunflowers were grown on massive areas around the plant. And the experiment proved successful. It didn’t go that well in Japan, though. Buddhist monks seeded sunflowers, amaranth and charlock. According to their estimations, about 8 million plants blossomed around Fukushima. Unfortunately, they did not solve the problem as the levels of radioactive isotopes did not decrease substantially.

It might be explained by different composition of Japanese soil – it is rich in mika which hinders absorption of cesium. 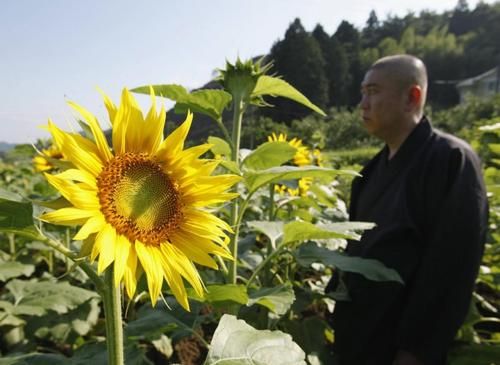 The fact is, however, that thanks to all the blooming flowers Fukushima doesn’t look as a dead wasteland anymore.

Have you got sunflowers in your garden?