We often show you fantastic photos which haven’t been airbrushed. Today we have got some examples of images that are nothing but fakes. You never know whether the things you see online are true or not!

The photo was edited although many believed the woman was really so flexible.

This photo is in fact a combination of three different images. According to Ralph Clevenger, the author, the photo of clouds was taken in Santa Barbara, California, the tip of the ice berg in the Antarctic and the underwater part in Alaska. Besides it is just a common photo of an ice berg that Ralph turned upside down and put under water in his image. Thanks to skillful editing the ice berg became so impressive. Now that we know the truth, perhaps a bit less.

#3 A purple forest in Scotland

The image of violet trees looks so impressive that many people decide to see that in reality. I can’t image how disillusioned they must be once they arrive there as in fact the forest was painted violet in Photoshop. The photo was taken by the river of Shotover in New Zealand.

#4 A star-shaped and a crescent-shaped islands

Molokini Island – a natural star and a crescent, located between Maui and Kahoolawe in Hawaii

The only true thing here is Molokini, which really looks like a crescent. The star was added using photo-editing software.

This amazing photo went viral in social media after Irma hurricane in 2017. This is, however, nothing but a smart compilation of two photos. This is the original photo of the shark.

This photo became popular after the earthquake of 25 April 2015 in Nepal. This is when the photo was shared in social media.
In fact it was taken in Vietnam in 2007 by a photographer called Na Son Nguyen. As he stated for BBC, he met the children while they were playing on one of local villages. The kids were playing while their parents were busy working. When the girl saw a stranger she started to cry and this is when her brother hugged her. 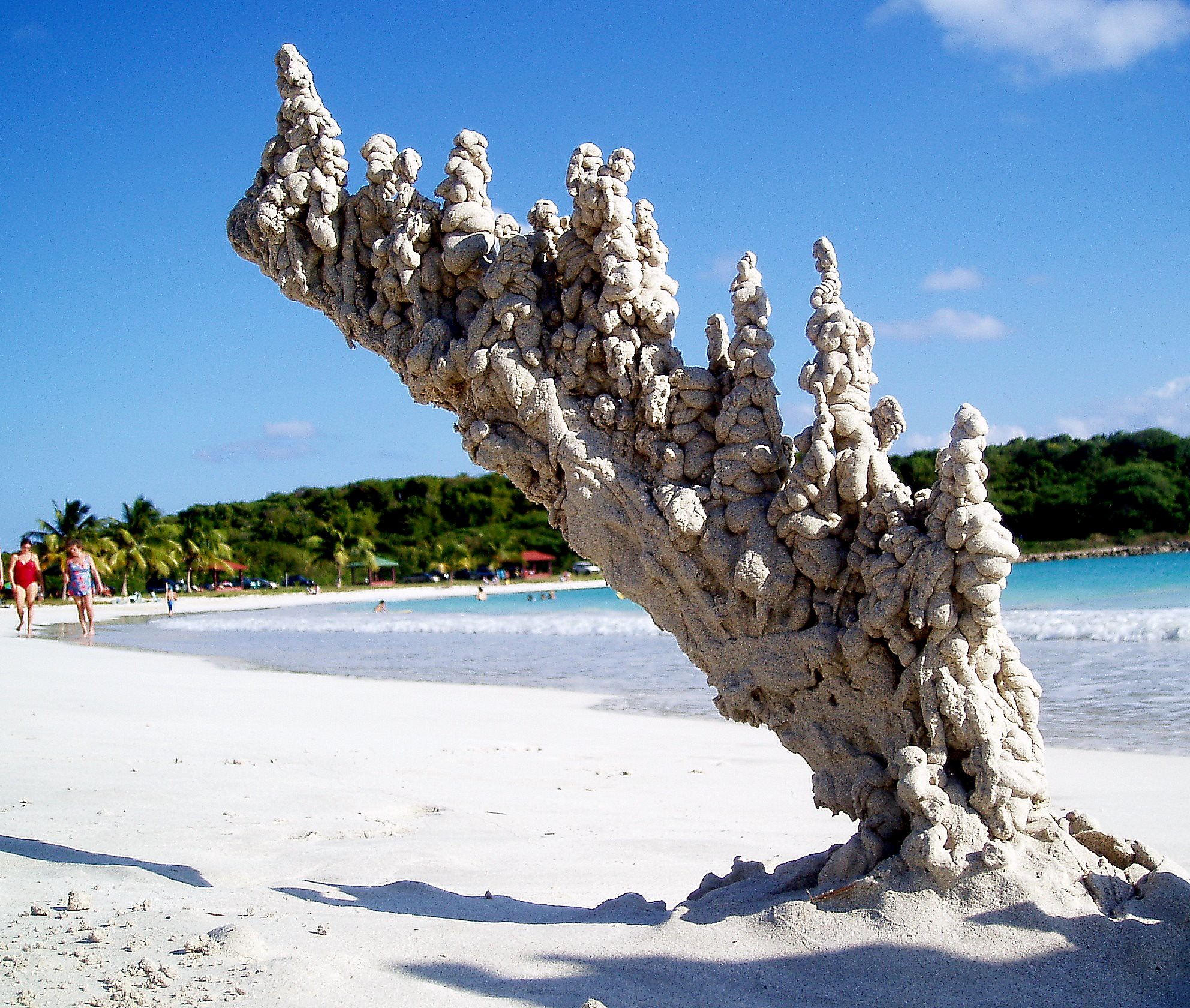 The truth is that lightening can create fulgurites (also called ‘stone lightening’) but they can form only in the sand, not over its surface. This photo actually shows a trunk covered with wet sand. It’s a piece created by Sandcastle Matt, who publishes photos showing his unusual works on Flickr.

It was 2013 when the image of a cow resting on a car bonnet appeared online for the first time. In reality the cow was edited in Photoshop. If that was real, the front of the car would collapse under the weight of the animal.

The photo went viral in 2003. According to the caption, Snowball was 87 pounds heavy and his mother lived in a nuclear power plant. In fact the cat is called Jumper and is of average size. His owner, Cordell Hauglie, magnified his pet using Photoshop and then shared the image with his friends as a joke. He had no idea that soon he and his pet will be popular all over the world.

#10 The Scream by Munch in Theresa May’s office

In September 2016 some British newspapers published a photo of the Prime Minister, Theresa May and 27 members of the Cabinet. It went viral because of The Scream by Munch hanging on the wall in the background. The photo turned out to be a fake and the real one shows a completely different work of art.

#11 A woodcut cabinet that looks like a graphic error

This photo appeared online in 2013. According to some websites, this is a carefully finished wooden cabinet that looks like a graphic error. In fact this is a computer design of furniture made of oak by Ferruccio Laviani. The final product was a bedside table which was exhibited during the furniture fair in 2013 in Italy. The photo above shows only the digital concept, not the real cabinet.

#12 The other side of Jupiter

There is an interesting story connected with this one. Many people question the authenticity of the image and they are strongly convinced it is just a fake. The use the photo shown below as evidence.

The truth is that the first image is a true picture sent by a space probe called Cassini. At the end of 2000, on the way to Saturn, Cassini photographed the Jupiter’s south pole. You can see it at NASA’s website. In this case the ‘evidence’ is false: the image of Jupiter was edited and pasted onto a sphere.

#13 a drop of seawater magnified 25 times

Many people could be surprised by the amount of plankton in a single drop of sea water. However, the title of the photo is somewhat misleading. In fact you need to filter the equivalent of a swimming pool to collect as much plankton. After filtering it all the organisms could be stored in a glass. That is why so much plankton could be found in tones of water, not a single drop. Besides this photo also shows the side of a Petri dish.

Have you seen any other popular images that turned out to be fakes?