When I was young I dreamed of becoming a flight attendant. The vision was very romantic to me. Traveling the world, amazing adventures and beautiful uniforms… Today I’m glad I didn’t become one. In fact, their job is difficult and stressful. Here are airline secrets you need to know about!

A former flight attendant shared with me the secrets of her job. She also revealed to me tricks that can make a flight much more enjoyable.
Here’s what she said:

Many airlines pay cabin crew only for hours worked “in the air.” If a flight is delayed, it’s not just travelers who are angry. From now on, I will not be surprised by the crew’s haste when preparing for takeoff.

#2 “We very much dislike being called waitresses”

Many people think that a flight attendant’s main job is to bring snacks and drinks. In fact, they take care of our safety all the time. They are the pilot’s eyes on what is happening aboard.

#3 “Don’t fall asleep before the plane takes off”

Sleeping during the takeoff and landing of an airplane is not a good idea. Stewardesses often have to deal with bleeding noses of sleeping people. This is not an exaggeration! It all comes down to pressure changes inside the cabin.

It’s better to stock up on antibacterial liquid. Airplanes are often cleaned superficially between flights. The toilets also often have the lights dimmed and the dirt simply can’t be seen. Airplane floors are the same story! Before you take off your shoes, think twice.

#5 “Jokes about terrorists are a really bad idea”

There are some people who think this is a great joke. In fact, they do not know that there may be undercover agents on board. These types of jokes can end up really unpleasant.

#6 The best seats on the plane are in the back 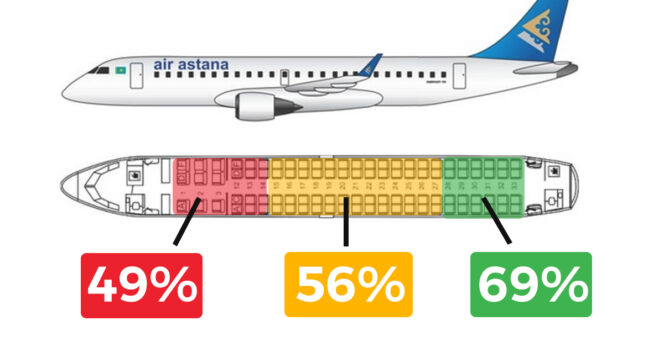 The reason is simple: stewardesses have all the essentials there. Blankets, drinks and snacks. You’ll get them faster than the rest of the passengers. There is also the belief that seats in the back are safer. Unfortunately, the latter, can never be taken for granted.

Just because you get them packaged in a bag doesn’t mean they are disposable. They are cleaned and packed for new passengers after each flight. The headphones have already been used by hundreds of people. I don’t know about you, but I find it repulsive.

#8 “Don’t drink coffee from the cart”

The water that is on board comes from a tank. The airline’s disgusting secret is that the tank is not cleaned very often. Some airlines have begun to receive such complaints as “The coffee has a strange taste!”… I think I know why!