There are companies that applied some unusual solutions to increase the sales volume. On the other hand, this is what their job is all about. And these are their ingenious ideas!

This is how some global brands won millions of customers all over the world. What exactly did they do?

To defeat their competition, Red Bull decided to charge twice as much for their energy drinks as their competitors. As if that was not enough, they asked the shop managers to put their drinks anywhere they want as long as they are far from other energy drinks.

It is not accidental that the IKEA aisles are so long and so winding. This lets customers look at a product from a variety of perspectives which subconsciously stimulates them to buy it. Even if this is nothing they really need.

Instead of printing leaflets promoting this taxi company, they print city guides advertising cafes, bars and other places of entertainment. Of course this is Taxi Mike that can take you there!

To promote the third season of ‘The Game of Thrones’, HBO would place a gigantic shadow of a dragon in completely random places, for example magazine covers, newspapers or buildings.

Smokers learnt how to take out cigarettes without taking the packet out of their pockets. Other people already knew what cigarettes they smoked.

This famous motorbike manufacturer comes first in terms of the number of tattoos including a logo. Harley promised big discounts for people who would come to their dealers with Harley Davidson logo tattooed on their body.

Vitor Mills, an engineer, came up with the idea while helping his daughter change the nappies of her second child. They had to be washed and dried before they could be used again. This is when he got the idea of disposable diapers and this is how the Pampers brand was started.

Razors for men and women 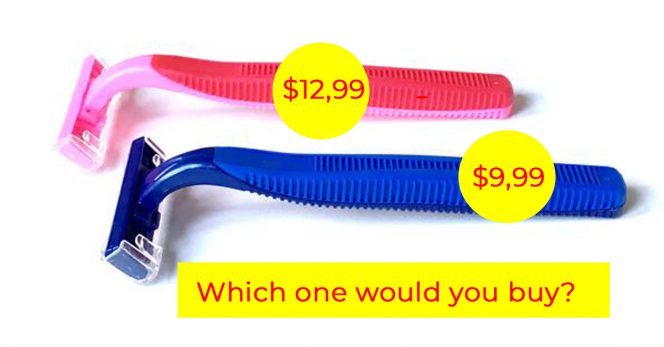 The advertisers analysed the market and realised that men and women respond to different stimulus while shopping. Why does it matter? Some identical products were slightly altered to make them look more suitable for particular sex. Of course they also differed in pricing. Razors are just a tip of an iceberg – there are many more examples like this.

There was a café that advertised itself as ‘non-Starbucks’. It had different furniture, music, atmosphere and provided different services. What was the Starbucks’ reaction? They bought the café but didn’t close it down. The atmosphere of the place remained and, as a result, even those who didn’t like Starbucks drank coffee in a place belonging to the company.