We are all special and unique – there is no doubt about it. However, some of us seem to have more skills than the rest. They are capable of things that seem to be beyond us. Can you raise just one eyebrow? Or perhaps you can move your ears?

These are 8 things that most us simply can’t do!

#1 Touch your nose or chin with your tongue

For most of us touching the nose or chin with the tongue is a circus trick. Only 10% of the population are estimated to be able to do it.

#2 Moving your limbs in opposite directions

Do an experiment: lift your right foot a few inches above the floor and move it clockwise. Now with the big toe try to draw ‘6’ in the air. Most of you will notice that you started to move in in the opposite direction. Perhaps this is because you write this digit with an anticlockwise movement first. Of course there are people who are the exception here.

Can you move your nose without moving your lips? There are people who move their nostrils not moving their lips or eyebrows. This can be practiced by moving the nose to the side first, and then letting the nostrils tremble gently.

#5 Sneezing with your eyes open

Skull nerves connect the nose and the eyes. That is why whenever you sneeze your eyes close automatically. As you can already guess, for some of us this trick is easy enough to master.

Although it’s pretty common, not all of us have developed this skill. Please note that bending the tongue in one direction that’s not everything. Check if you can bend it in the other direction or fold it in three parts.

#7 Bending the thumb to the other side 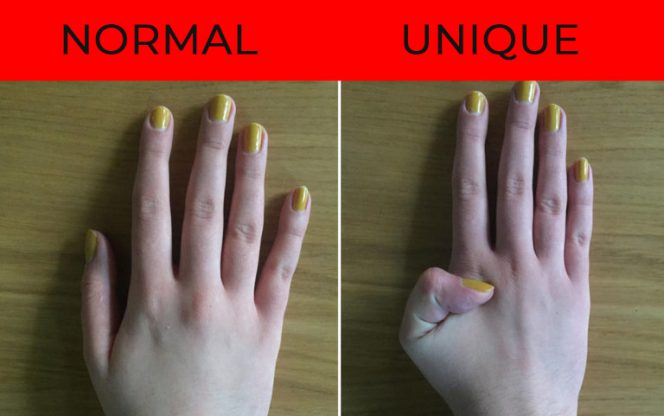 This is how some people can bend the thumb somehow not breaking it. This trick is for those of us with interphalangeal joints. Some of them can do this trick with one thumb, others with both.

For most of us that’s no-can-do trick to tickle ourselves. Our brain receives the sensation that causes tickles and controls it before it actually affects the body. As a result self-tickling is hardly possible. Hardly. People with schizophrenic features might do so as their minds are not aware that such sensations are voluntary.

Can you do any of the tricks? Does it make you feel just a little bit special?