The kitchen is the heart of home. That is why it calls for extra care while being designed and arranged. The fundamental principles are functionality and safety. However, sometimes we make mistakes and as a result it is difficult to move around the kitchen.

Also, some appliances end up too close one to another and that may pose a danger to the users.

How to arrange a kitchen. Avoid these eight most common mistakes

We have got 8 arrangements for you. They represent typical mistakes made during designing kitchens. We also have some hints about how to avoid them.

#1 Don’t squeeze in too many things 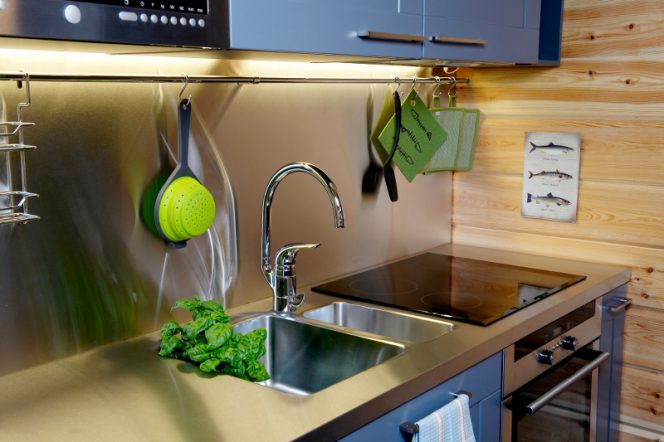 While arranging the kitchen it is safety that takes priority over anything else. Consequently, you need to make sure that there is appropriate distance between particular appliances. In the picture here the sink is too close to the cooker. If the cooker is gas-powered, you may accidentally put out the flame while washing up the dishes. Sprinkled water might fall into a hot frying pan with some fat and scald somebody. Moreover, there is no working space between the cooker and the sink, which makes the room much less practical.

The best solution would be to have a kitchen countertop (60cm long) between these the cooker and the sink. 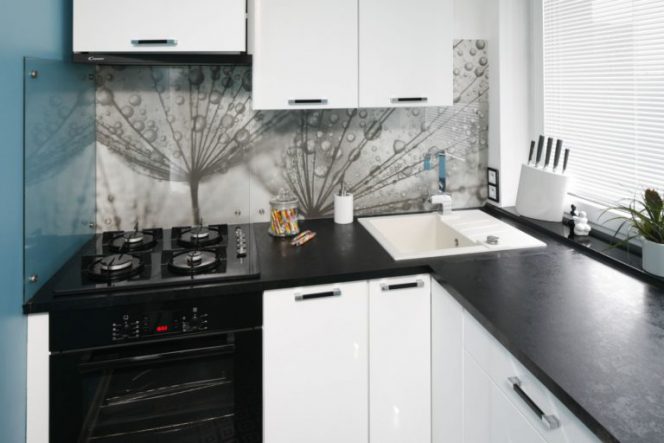 Another mistake is made by reducing the working space. With cooker placed like this, the top will be available from one side only, which might be a nuisance while you are cooking. When the cooker stands in the corner, the burners are somewhat inaccessible. Apart from that, the steam reflected by the wall might pose a threat of scalding. 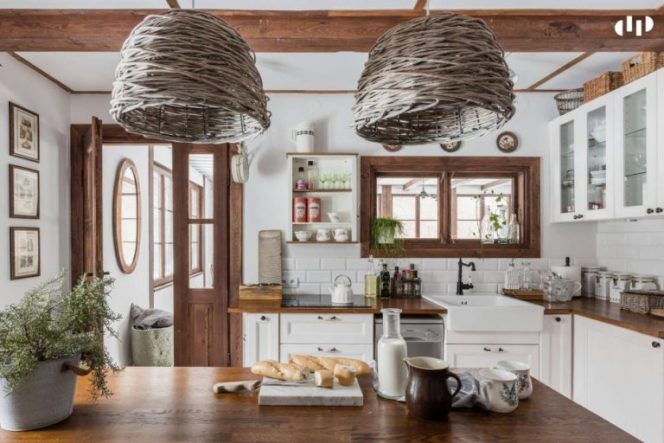 The biggest mistake here is the number of apertures which results in lack of space for cupboards. Only a few sections of the wall might be fully used. The door leading to the kitchen is really wide. Additionally, there is the utility room door. As if that was not enough, the terrace double door (completely useless by the way) is also there. Another mistake was placing the sink right opposite the lounge door. Your guests sitting there will have the chance to admire the view of dirty plates in the kitchen.
Kitchens connected with the lounge should have the dishwasher out of the guests’ sight so that people in the most representative part of the house (the lounge) won’t see it. If they got rid of the terrace door, that would give them more space for extra kitchen furniture. 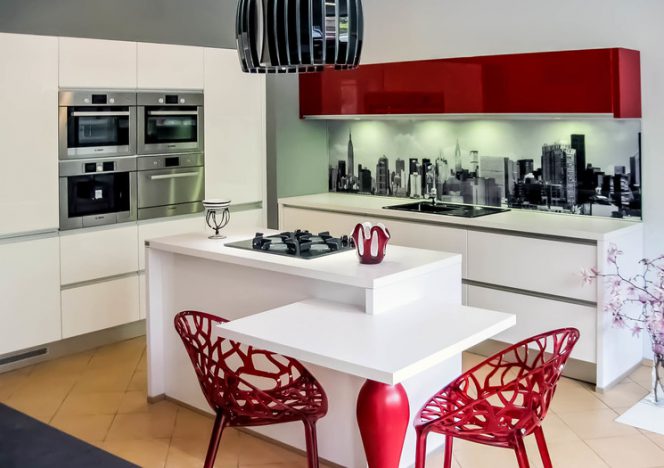 The problem with this arrangement is that the cooker is in the middle of the small island, connected with a breakfast table. That could be a little bit dangerous with somebody sitting at the table and another person frying something at the same time.
The kitchen is quite big so the island might have been put more traditionally (here closer to the dining room)  taking into account some space to have meals. The cooker would easily fit in the working area of the kitchen top, of course assuming safe distance from the sink.

#5 The cooker and the dishwasher in the corners 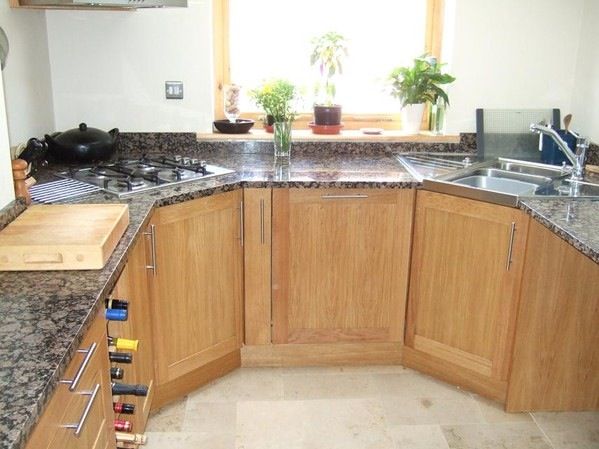 This design does not take advantage of the kitchen’s space, which is ridiculous bearing in mind the size of this room here. As a result, some parts, especially behind the cooker and the dishwasher, are not easily accessible (but could be used to store something, for example cooking utensils)
It would be much better if the cabinets would have corner drawers or rotating shelves instead.

#6 The right fridge in the wrong place 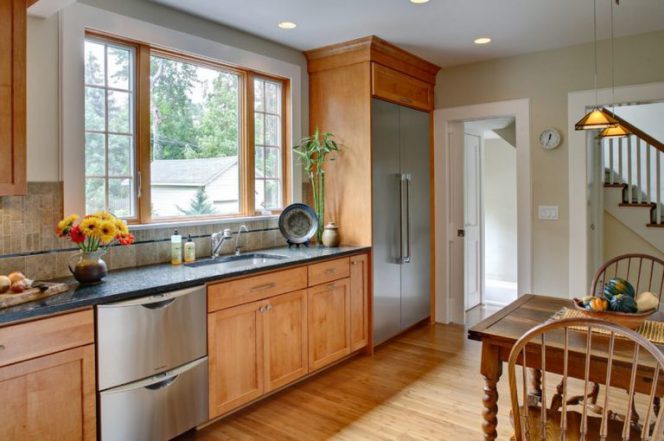 The fridge has to be in a right place. You need to access it really easily. For example this design seems ok. The fridge is at the end of the processing flow and at the same time near the pantry. The thing is that once you open the fridge, there’s no way you enter the pantry.
The fridge really shouldn’t be there.

#7 The cooker at the entrance to the kitchen 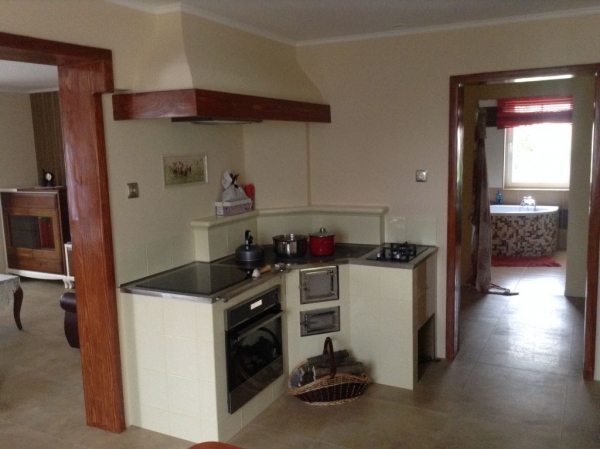 Here it is not only about functionality. It is primarily about safety. With the cooker right at the entrance (and at the same time next to the stove), there is no kitchen top space. There is a risk that somebody may get scalded entering the room by knocking down a pot of boiling water or hot oil to name just two.
It would be much safer if the cooker was on the other side of the kitchen. 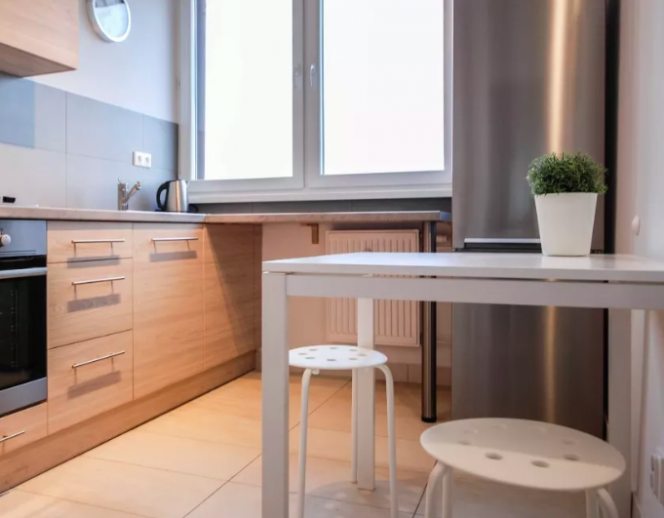 Again, at first glance everything looks good. The thing is that you can open the fridge as long as the people sitting at the table are not sitting anywhere else but only in places shown in the photo and nowhere else. Otherwise opening the fridge will be a bit harder.
It is not a big mistake of course. However, it will be much easier if the fridge was anywhere but in that corner.
If you are going to arrange your kitchen soon, try to avoid these mistakes so that using your kitchen will be a pleasure, not a nuisance.