Have you ever wondered why buildings, or even small items, sometimes differ so much all over the world? Travelling across the USA or Europe one might notice a variety of approaches to architecture or design. Every single decision happens to have an explanation.

Immured windows in old British houses are an example of how ridiculously law can affect culture. In 17th century the Brits had to pay taxes depending on the number of windows they had. Only the rich could afford to have glazed windows. The taxes were so high that they could be an equivalent of what an owner of a few yachts has to pay now. Also, the manufacturing process of glass was really expensive. As a result, it was sometimes the case that the poor had to live in complete darkness.

#2 Microwave ovens at the beginning of 20th century, Europe

At the beginning of 20th century some of European radiators were bifunctional. Apart from heating the house, they would also dry your shoes or heat your meal. Of course you won’t find any devices like this anymore. Technology got a bit more advanced…

In 1960’s Russian houses were built in such a way that the kitchens would have a seasonal fridge. Thick walls of houses allowed the architects to design a special shelf where food could be kept.

The lid of the hatch in Wiesbaden, Germany, looks like a spaceship from the Star Wars. In fact this is an entrance to the dungeon in Salzbach. Originally it was a sewer, now it is a tourist route.

The first garbage chute was design in Vladivostok in 1938. At first the chutes were inside flats. Later, they were moved towards centres of each floor of a block of flats. Now they still can be found in old blocs of flats in central and eastern Europe.

Houses in Bulgaria and Montenegro usually don’t have window sills. It might seem impractical for people who move to live there. Anyway, this is so because the walls are thin and as a result there is no space for the window sill. In Montenegrin language there is no word for ‘window sill’.

#7 A window in the wall between the bathroom and the kitchen, Russia/Poland

A window in the wall between the bathroom and the kitchen is a distinctive feature of a house from the Khrushchev period. The window gives the impression of more space which was an advantage for the tiny bathrooms at that time. Another reason is that it provides extra light. This solution is no longer applied.

While buying milk is nothing special these days, in the past it used to be delivered to the door. Sometimes it was left literally at the door, and sometimes, for example in the USA and Great Britain, the milk guys would use special stashes that had doors on the sides – inside and outside the house. 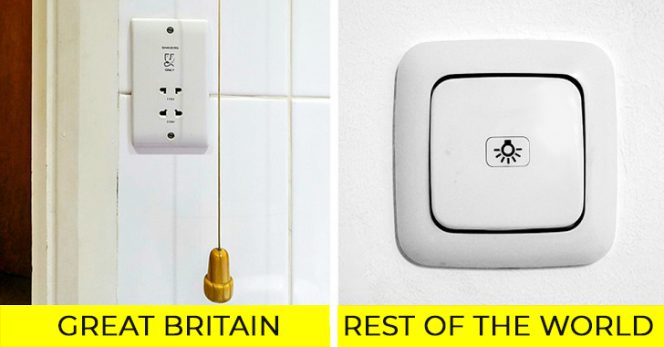 Bathrooms in old British houses have lights switch with a string to pull. It is so due to humidity. Standard switches were not used as the people were afraid of electric shock.