One of the best things in life is discovering that we are all so different. While some of us are talented in art, others become Olympic champions. Some go for music, others choose the path of fine art. As for works of art, the best one are  those that can be… inhabited! The architects and interior designers could be proud of the examples ahead of us. 16 strange and at the same time stunningly beautiful houses.

#1 An ideal house for a musician

A student of the Huainan University of Technology wanted to give the city some publicity. He decided to design a grand piano-shaped hotel. The violin hides a staircase through which you can get inside the building. I wonder if there are classical music concerts held there…

#2 Never flush your dreams. Unless you dream of toilet!

Strange as it seems, there is an institution called World Toilet Organisation. In 2007, the mayor of Suwon, South Korea, decided to pay tribute to the founder of this peculiar institution. The gift was as unusual as the organisation itself. He built for them a house worth one million dollars. Well, the shape is pretty bizarre. I just can’t help but wonder what it looks like inside…

#3 A property Fred Flintstone would be proud of

Casa de Penedo, also known as ‘The Stone Castle’ or ‘The Stone House’ is located in the north of Portugal. It was built of four giant boulders that work as foundation, walls and ceiling. The construction works started in 1972 and lasted approximately two years Casa De Penedo was a bungalow of the designer. Today it is a museum full of photos of its creator.

#4 A house for the lonely

If you appreciate solitude and breath-taking views, this is something just for you. Maxime Qavtaradze (59) is a monk who decided to live in a monastery in Georgia. The building is on a natural monolith rock in the central part of the country. The rock is about 40 metres high. At its bottom, there is a picturesque river meandering down the valley.

This design looks as if it was developed on another planet. In fact we are in Inverloch, Australia. The owners of the house would like to enjoy the view of the water and nature from anywhere in the house. James Stockwell, the architect, designed this house which floats over the ground looking like a spaceship.

This house, known as ‘House NA” is in Tokyo. It was designed following the rules observed by our ancestors. Living on trees they could see the surrounding space and spot an approaching danger. The owners of the house describe it as ‘the unity of separation of cohesion’ the house is a room and at the same time it is also a set of rooms. ‘House NA’ was supposed to remind a futuristic tree with branches as rooms opened for everybody. 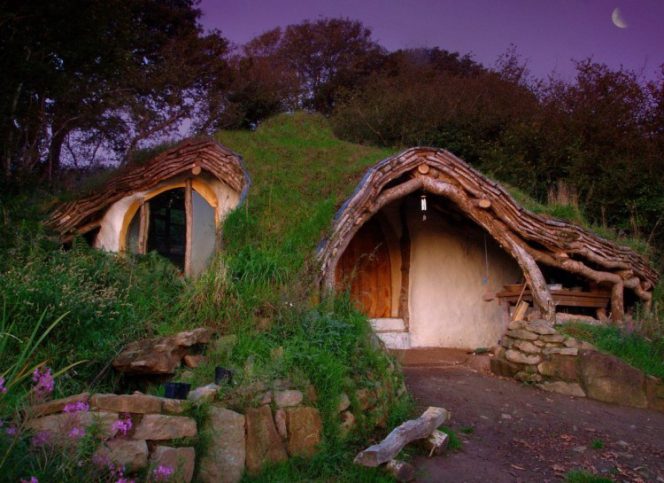 In 2003 Simon Dale wanted to move with his family to a single-storey house. As a big fan of ‘the Lord of the Rings’ he knew that the best solution would be an imitation of a house shown in the movie.

#8 A house under a gigantic boulder

Benito Hermandez is the owner of this highly unusual flat, where he spent 30 years. The house was built of brick and the roof is made of the 40-metre diameter boulder.

The dome houses were built by a foundation called Domes for the World. They decided to create this unusual houses for people who lost their homes as a result of the tragic earthquake in Indonesia.

If you have ever wondered how the underworld of sirens might look like, the house designed by Javier Senosian might be the answer. This shell-shaped structure can be seen in the capital of Mexico. The design was inspired by works of a Katalan artist, Gaudi. The interior of the house gives you the sense of proximity of nature and reminds you of the symbiosis with nature we should follow.

#11 The narrowest house in the world. Warsaw

Poland also has some designs worth your attention. ‘Dom Kereta’ (Keret’s House) was designed by Jakub Szczęsny. You can find it between the streets of Chłodna and Żelazna in Warsaw. This structure is 152 centimetres (5 feet) wide. It must be said that hey made the best use of the tiny space… It was to be deconstructed after 4 years, in 2016.

This building was designed by Pierre Andre Senizergues, a former skateboarding world champion. His dream was to get around the house skateboarding. Thanks to this unique design the dream came true.

#13 You will never ask what the time is again

This Brooklyn penthouse was built inside a clock. Its area is 2133 square metres and it offers one of the most spectacular views of New York. The property is worth 18 million dollars!

Tony Alleyne, a designer, had been trying all his life to imitate the interior of Enterprise (a space ship) this apartment really looks as if it was from another dimension. Even the tiniest details were reconstructed, for example LED lights or intergalactic sound effects.

A house built on a rock on the Drina River, Serbia, about 100 miles away from The capital, Belgrade. It was built in 1968 by a few young men who decided that the rock in the river was the ideal spot for this small shelter. 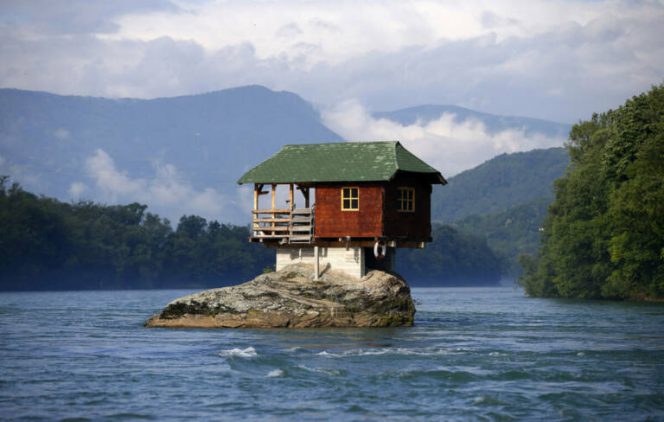 #16 An artistic building in Vietnam

The Hằng Nga guesthouse in Vietnam stands out with its design. Dang Viet Nga, the architect, used pictures instead of plan to design the structure. 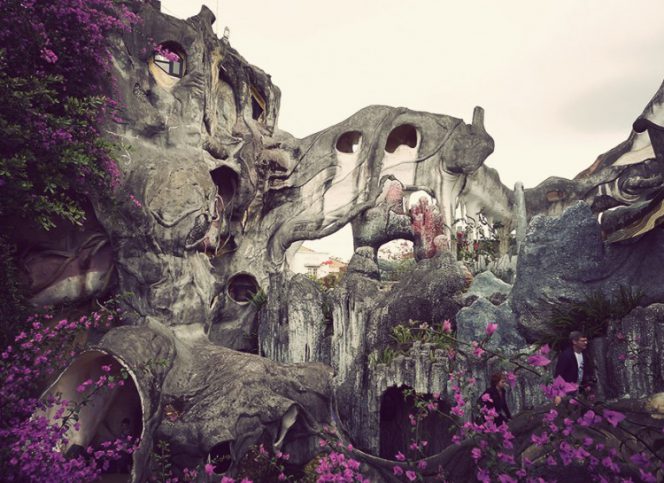 Which of them would you like to live in?